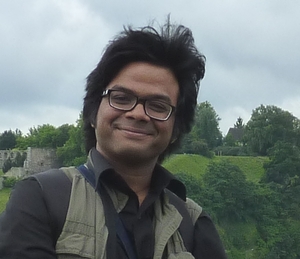 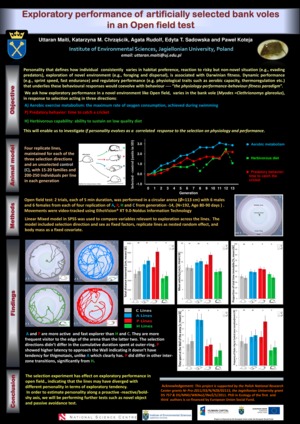 It has been proposed that evolution of complex physiological adaptations, such as endothermy or capability to utilize a specific diet, could be driven by natural selection acting primarily on behaviour. Behavioural trait such as "personality" of individuals, influences habitat preference, aggression, attitude to novel objects or situations, which in turn could lead to the variation in physiological traits such as metabolic rate. As a consequence, individuals with higher resting metabolic rate are able to collect, process, and invest more energy, complementing their active personality. However, empirical evidence for this hypothesis remains ambiguous. To test the hypothesis we are comparing exploratory behaviour of bank voles (Myodes glareolus), selected for high aerobic capacity (A), predatory aggression (P), ability to grow on low quality herbivorous diet (H), with that of unselected control (C), in an open field condition. By measuring exploratory performance in an environment like open field, which is novel and stressful to these semi-fossorial rodents, we would interpret personality of individuals across the selection lines, on an “proactive – reactive” axis. We hypothesize that voles from A and P lines will show more “proactive”, whereas those from H lines more "reactive" personality, compared to voles from unselected C lines. The results will enable us to investigate if variation in personality is heritable and genetically correlated with the traits under selection.