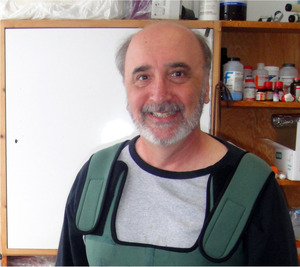 The teleost Astyanax mexicanus is a species complex consisting of sighted surface-dwelling (surface fish) and blind cave-dwelling (cavefish) forms. Cavefish show constructive phenotypes, such as novel behaviors mediated by enhanced sensory systems, and regressive phenotypes, including the loss of eyes and pigmentation. Because surface fish and cavefish are interfertile genetic approaches can be used to study these phenotypes. Vibration attraction behavior (VAB) is a foraging behavior that detects aquatic vibrations emanating from living prey and requires a specialized class of sensory neuromasts (orbital neuromasts or ON). VAB is pervasive and strong in cavefish but is only rarely seen and weak in surface fish. Genetic analysis of F2 progeny obtained by crossing surface fish with cavefish showed that VAB is paternally inherited and controlled by several QTL that are congruent with QTL for ON number. Importantly, two of the major VAB and ON QTL cover the same genomic regions as some of the QTL responsible for cavefish eye degeneration. This QTL clustering, along with negative phenotypic correlations between VAB/ON and eye size in the F2 generation, suggest that the underlying constructive and regressive phenotypes are co-regulated, either by antagonistic effects of the same pleiotropic gene or by tightly linked genes that are subject to genetic “hitchhiking”. Thus the evolution of eye loss in cavefish may be a consequence of strong positive selection for VAB and its sensory receptors, whose enhancement is adaptive in the dark cave environment.