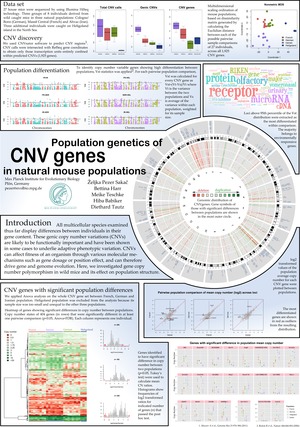 Copy number variation (CNV) is a form of genomic structural changes that are considered a major source of intraspecific genetic variation. It is not unusual that CNVs encompass entire genes and their regulatory sequences. As differences in gene copy number can underlie fitness differences between individuals, studying the population dynamics of copy-number variable genes can provide valuable clues to selection and adaptation processes. Here, we analyze genic CNVs from next-generation sequencing data of 27 individuals belonging to four natural populations of the house mouse (Mus musculus). We find that the environmental response genes are overrepresented in genic CNVs in all four populations. CNVnator software was used to genotype all the loci for their respective copy number. This allowed us to examine their variance within and across populations. Apart from the strong population stratification in geographically distinct groups, we observe much higher level of diversity between mouse populations than was previously reported for human populations. Several genes were identified that show no CNV within some populations while being variable in others. These cases stand out from a generally polymorphic CNV background, implying that at least some of them might be subject to selective constraints.